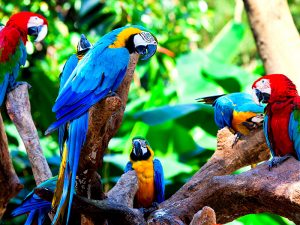 on all tropical and subtropical continents including Australia, the islands of the Pacific Ocean, Asia, South America, the southern regions of North America and Africa as well.

The largest number of parrot species is found in Australasia and South America. A few endemic species are found in the Caribbean and Pacific islands, while the Lories and Lorikeets are found from Sulawesi and the Philippines to Australia and across the Pacific. The greatest diversity of parrots is in and around New Guinea.

The subfamily Arinae covers all the Neotropical parrots, which includes the Amazons, macaws and conures. They are found from northern Mexico and the Bahamas to Tierra del Fuego in South America.

The pygmy parrots, subfamily Micropsittinae, are restricted to New Guinea. The subfamily of Nestorinae is three species of unusual parrots from New Zealand. Broad-tailed parrots, from the subfamily Platycercinae, are restricted to Australia, New Zealand and Pacific islands as far as Fiji. The final true parrot subfamily, Psittacinae, includes a range of species from Australia and New Guinea to South Asia and Africa.

Very few parrot species are wholly sedentary or fully migratory – most of the parrot species fall somewhere in between. This would explain the poorly understood movements, with some species found to adopt fully nomadic lifestyles.

Amongst all parrot families, the largest parrots are from the three Nestoridae species. The Psittacidae parrots vary in size. The most obvious physical characteristic about parrots is their strong, curved, and broad bill. With a prominent upper mandible, it curves downward to a point. The lower mandible is shorter and has a sharp, upward cutting edge.